In addition to dominating the Japanese domestic racing scene. Endless is also fiercely competitive in many worldwide motorsports categories. Developmental feedback and high praise from partner teams in various motorsports categories have allowed us to release a highly-regarded selection of race compounds to the public domain of race-oriented end-users. When compared to professional race applications in terms of weight and brake cooling capabilities, braking for tuned cars within the amateur race realm can potentially be more strenuous and demanding. Due to these conditions we have released our professional racing compounds to the public in order to facilitate performance needs on the track. Brief descriptions of popular race compounds available to the public are listed below.

Sprint race brake pads offer a wide range of friction coefficients and torque curves for various driver preferences. In order to chose the best friction material, the car weight and chassis balance must be taken into consideration. Other factors to consider are the tires to be used with them, the road conditions of the circuit to be raced on and temperatures if they are known.

For light-weight cars and FF cars, we primary recommendations to start with would be ME20 or MS25/20. Taking the tires into consideration, if tire grip and road surface grip are known to be high our recommendation would be to start with N35S and make any adjustments as needed once a base line is established. For World Touring Car Championship style races we would select compounds with a high initial response. Compounds that offer good control while maintaining brake efficiency is preferred, in situations like this S580, S33O and other high initial bite compounds are recommended for the front.

For GT cars including GT3 cars our initial recommendations would usually be N35S, MS35/40, S41S based on the presumption of high down force and the need to select compounds best suited for heavy brake loads. When circuit conditions call for particularly higher brake loads the S41S, W003, or other higher friction more specialized compounds are required.

In terms of continuity with road surface conditions and ABS units the more mild and very stable characteristics of the ME20 would be best suited.

In cases where rear wheel lock may be an issue or for the rear of FF cars a more mild, slightly lower friction compounds specially designed to avoid rear lockup issues are available.

For the rear of FF setup cars recommended compounds include, but are not limited to NC44 and S55G or T47G for other cars depending on the load.

※MS20 and ML20A can also be used for the front if the load is suitable. They feature high controllability.

After trying the recommended compounds as listed above you are still not finding a good match we can provide further recommendations based on your specific needs. Collecting as much data as possible is critical in making adjustments to the brakes. Temperature data is a key factor in diagnosing any issues, examining the rotor and brake pad surfaces and any other feedback will play a key part in helping you to find the right compound that works best for you.

Designed to warm up gradually even under heavy braking conditions, MS25 is well suited as a slightly lower friction compound to help prevent lock up issues when combined with a higher friction pad on the opposite axel.

The MS35 compound was designed to be an excellent all purpose sprint race compound that offers a mid to high range initial bite with good modulation and control. The general characteristics of this compound makes for a good sprint race pad under a wide variety of conditions, while providing excellent pedal feedback to the driver.

Exhibits stable performance at high temperatures and brake loads with quick, sharp and responsive braking force. Offers a consistently strong bite in both wet and dry conditions where the car is under heavy loads and strong initial bite is required. N35S is the flagship Rally compound currently in use in all Rally Tarmac and Gravel events around the world.

N30S compound offers a very high initial bite. It is a good step up from the N35S and provides an exceptional response. The braking power is elevated so the gap between initial bite and maximum brake power is shorter than N35S. Despite the high initial bite N30C is similarly gentle on the discs, has a low wear and does not create heat cracks or other rotor issues. N30C is popular as a high friction Rally compound and works well for non-masterback brake rally cars.

In endurance races, not only must you match with the features of the brakes, but how you will run the entire race distance is also a big issue. In cases of 4 or 6 hour races, it is generally presumed that the brakes will not be changed, but in longer races like 12 or 24 hour ones, planning the number of times you will change the brakes also changes the required type of friction properties, while on the other hand brake features are more important to pursue, making it necessary to compromise.

MA45B and YZ080 are ENDLESS's popular endurance race friction materials.
MA45B is a semi-metallic material and is often used in endurance races in light cars and cars with good chassis balance. It first earned its reputation as a pad which could run the Nürburgring 24 hour race without changing the brakes in the Porsche cup car, etc., and even now it is favored by many Porsche users. As it demonstrates stable function even in races with relatively high loads and has superior friction properties it is used in many GT cars, while in 12 or 24 hour races it cedes this spot to YZ080. YZ080 is a sintered compound material which, although it has a low absolute friction coefficient, it has a sharp initial response and possesses features which are suitable for braking in long-distance races. Coupled with its superior friction properties, this makes it widely used in GT3/GTE cars.

In GT cars where rear wheel lock is a concern, you can use MS20 or ML40A as well, the same as with sprint races.

Semi-metallic materials made for higher loads such as ML35A/40A are suitable for race distances of 5-8 hours and in high load conditions.

The friction speed of a pad will change depending on changes in various conditions such as circuit layout, tires used, air temperature, etc. If considering use in endurance races, it is essential to do tests in advance, etc., to calculate amounts of friction and prepare the required number of pads before racing.

MA45B offers excellent heat resistance and wear. Originally developed for endurance racing due to its excellent wear , offers low to mid range friction, excellent modulation and flat across the temperature ranges regardless of speed and temperature. Currently being used worldwide as the go-to endurance compound.

As an endurance compound the ML40A offers good modulation and heat resistance. This compound formulation offers moderate friction levels however helps to prevent any lockup issues even under the most aggressive conditions and temperature ranges.

Developed specifically as a suitable rear compound for light weight GT cars. ML20A offers a lower initial bite on a very flat torque curve that helps prevent rear lock up issues. The compound is very easy on rotors and is able to maintain excellent pad wear.

Developed as a mid to high range endurance compound, YZ080 offers a very flat torque curve and friction levels remain consistent regardless of speed and temperature. Popular for the 24 Hour Le Mans as well as 12 Hours Sebring on the GT cars. Drivers have reported excellent modulation and stability while maintaining excellent pad and rotor wear. 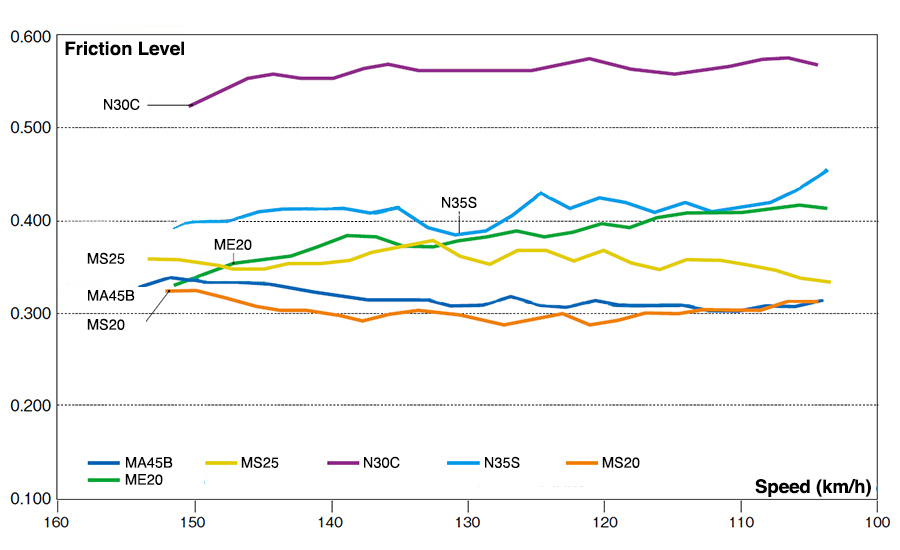